Mellow Mushroom makes the best pizza in Denver, Colorado. Our restaurant is located off 16th Street. Mellow is a favorite among locals from Aurora, Arvada, Lakewood, and the surrounding areas.

A rich blend of five cheeses baked with spinach and artichokes. Served with garlic toast points.

Made with our classic dough and tossed in garlic butter and Parmesan. Served with Pabst Blue Ribbon™ beer cheese.

Made with our classic dough, served coated in garlic butter, Parmesan and a side of Mellow red sauce or coated with garlic butter, kosher salt and served with traditional yellow mustard.

French bread smothered in garlic butter, melted mozzarella and sprinkled with Italian seasoning. Served with a side of Mellow red sauce.

Trio of meatballs stuffed with fresh mozzarella and topped with Mellow red sauce, then sprinkled with shaved Parmesan, fresh basil and breadcrumbs.

The premium Mellow wing experience. 9 double-baked wings coated in a rich garlic Parmesan sauce with just a hint of heat. Garnished with grated aged Parmesan and chives. Served with celery, carrots and your choice of ranch or bleu cheese dressing.

Double-baked for a crispy and flavorful wing. Tossed in your choice of sauce: hot, mild, BBQ, jerk, sweet Thai chili, teriyaki or naked. Served with celery, carrots and your choice of ranch or bleu cheese dressing.

All Pizzas Served As S 4 Slices / M 6 Slices / L 8 Slices Calories listed per slice
Choice Of “Classic” Crust Or Mellow “Thin” Crust
Our pies are basted with garlic butter and sprinkled with Parmesan cheese
10” gluten-free pizzas are also available for an additional $3.00.

Made with mozzarella, then layered with Buffalo chicken, caramelized onions and applewood-smoked bacon. Finished with a double swirl of Buffalo sauce and your choice of chunky bleu cheese or ranch dressing.

Shredded mozzarella topped with our signature BBQ chicken, sharp cheddar cheese, caramelized onions and applewood-smoked bacon. And to keep it funky, finished with a swirl of BBQ sauce.

This pie will take you for a ride. This Cuban-inspired pizza comes with jerk marinated pork, ham, salami, Swiss and mozzarella cheeses, diced pickles, and an irresistible mayo-mustard drizzle.

*These items are so good they count as two ingredients
Many of our ingredients are certified gluten-free
Ask your server for details
Our tofu, tempeh, roasted pork, all-natural chicken and steak can be prepared in your choice of our sauces: BBQ, Buffalo, jerk, pesto or teriyaki
10-120 cal

Build Your Own Pizza - Cheeses

Build Your Own Pizza - Meats/Proteins

Build Your Own Pizza - Veggies & Other Ingredients

Handcrafted and baked to order, basted with garlic butter, sprinkled with Parmesan and served with a side of Mellow red sauce
(90 cal)

Build Your Own Calzone

Start with a cheese calzone and add your favorite ingredients. Each ingredient

All-natural 1/2 pound Angus beef patty from the family-owned Harris Ranch and come with Cascadian Farms Organic Spud Puppies (+280 cal)
** Some products may be grilled with garlic butter
All burgers may be cooked to order
Unless otherwise requested, hamburgers are cooked to “medium.” Consuming raw or undercooked meats, poultry, seafood, shellfish or eggs may increase your risk of foodborne illness.

Lettuce, tomato, pickle and onions. Served on a grilled and buttered brioche bun.

Build Your Own Burger Just The Way You Like It

All BYOB’s start with a Mel’s Classic including lettuce, tomato, pickle and onions.

Local To Your Mellow

Drizzled with olive oil and sprinkled with paprika and fresh basil. Served with garlic toast points or carrots and celery

An olive oil and garlic base with roasted red potatoes, applewood-smoked bacon, caramelized onions, cheddar and mozzarella cheeses. Finished with chives and a drizzle of sour cream and spicy ranch dressing.

Sweet. Savory. And out of this world. An olive oil and garlic base, all-natural curry chicken, mozzarella, Roma tomatoes, onions, topped with fresh basil, cucumbers and a swirl of Thai chili sauce.

Pizza By The Slice

Choose two menu items from the list below to make a You Pick Two Lunch.

Time For A Sundae

A playful mix of cherry juice and fresh lemon-lime house-made sour mix finished with notes of vanilla and caramel.

Made fresh to order with all-natural peach pureé and Lipton Iced Tea.

A blend of Lipton Iced Tea and Minute Maid Lemonade.

Sips and Sodas - Single Servings Only

Made with our classic dough and tossed in garlic butter and Parmesan. Served with beer cheese.

A rich blend of five cheeses baked with spinach and artichokes. Served with garlic toast points.

Tossed in your choice of of sauce: hot, mild, BBQ, jerk, sweet Thai chili, or naked. Served with celery, carrots, and ranch or bleu cheese dressing.

Choice of “Classic” Crust or Mellow “Thin” Crust
Our pizzas are basted with garlic butter and sprinkled with Parmesan cheese
See Gluten-Free and Vegan section for additional pizza offerings. Pizza calories listed are per slice.

Mellow red sauce and mozzarella on our signature crust.

Mellow red sauce, mozzarella and pepperoni on our signature crust.

Mozzarella layered with Buffalo chicken, caramelized onions and applewood-smoked bacon. Finished with a double swirl of Buffalo sauce and your choice of chunky bleu cheese or ranch dressing.

Lunch orders for one
Choose from our salads, sandwiches, or small pizzas for a personal lunch experience.

Your choice of sandwich, kettle chips, and two small cookies or brownies.

Your choice of salad, kettle chips, and two small cookies or brownies.

10” pizza for one. Mellow red sauce and mozzarella on our signature crust.

10” pizza for one. Mellow red sauce, mozzarella and pepperoni on our signature crust.

Sandwiches may be ordered in Trays, Packages, or Personal Lunch offerings.

Ordering made easy
Choose a Mellow package for gatherings of any size.

Choose from our selection of signature sandwiches with kettle chips, cookies and brownie bites. *Minimum order of 8 people.

Tea and Lemonade offered by the gallon.

A blend of Lipton Iced Tea and Minute Maid Lemonade.

Choose from our selection of 10’’ Certified Gluten-free pizzas, or vegan pizzas made with Follow Your Heart® vegan cheese or vegan salads.

Wednesday
Lets Get Through the Week, Together
7:00PM - 10:00PM
$10.00 Small Cheese Pizza and a Beer
Featured Wine Specials

Inspired by the trippy side of Denver, the restaurant is filled with colorful murals. The open floorplan of the main dining room immerses guests in psychedelic artwork. The bar features multiple large TVs to help you get the party going and cheer on your favorite team. 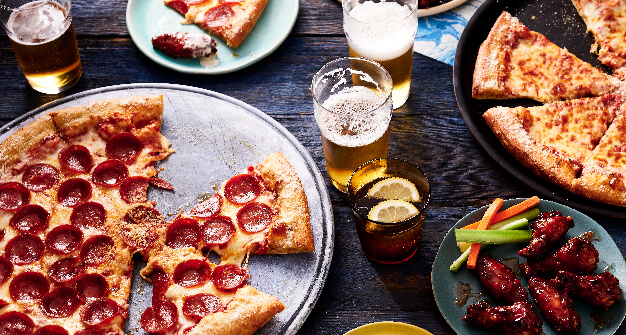 Find us in the Tabor Center not far from the Colorado State Capitol. We’ve been a favorite for locals for more than 10 years. Our guests come in for the very best pizza, cold beer, craft cocktails, a unique atmosphere, and a great time! We are proud to sponsor local sports teams and schools.

We validate parking for guests who park in the Tabor Center parking garage. Come in for Breweries of the Month events, Tuesday trivia night, and happy hour specials.

Can’t make it to the restaurant? Have your meal delivered right to your door! We offer great delivery and catering options, so you can keep it Mellow any time.

My son and I will typically go to Mellow Mushroom for our guys nights. We have had so many positive experiences we decided to bring the rest of the family. The beers on tap are amazing and we have grown very fond of south west wings. At the end of the day, it is the pizza that we come here for. There are numerous traditional and off the wall pies here. There is something for everybody's palette. We have also been lucky to work with a wonderful server by the name of Carina. Not only is she a joy to enteract with, but she is very attentive and helpful in serving us. Carina makes our meals that much better at the Downtown Denver Mellow Mushroom 🍄

Good taste and clean restaurant. It took them a long time to bring the order(about an hour; it's understandable to some extent due to being short staff)... Strange thing: the bar and the restaurant have different payment systems. If you order from the bar, you can't sit on the chairs of the restaurant, though the bar is within the restaurant.

The pizza was good, the thin crust and the classic crust were both good. The service was attentive, the tables and chairs were clean. The atmosphere was chill, lighting is unique but not distracting. Expect to spend about $25 per person at dinner.

We decided to try out Mellow Mushroom because they offered gluten free crust. However, it wasn't really crust in my opinion, maybe more like flatbread. Either way, nothing spectacular. We did get the Greek salad too and that was very good. We also appreciate all the drink options.

This was our first time at the Mellow Mushroom. When we went it was not very busy and the atmosphere is clean, hip, and unique. The staff was very chill and friendly, and our server, Elijah, especially was enthusiastic, attentive, and chill. I will not return unless Elijah is on the clock.